Mukesh Ambani, the chairman of Reliance Industries officially announced the  Reliance Jio 4g , Voice and Jio net plans in the Reliance Industries annual General meeting.  Their plans are much same as expected and the data rates at rs. 50 per Gb 4G data, The bigger the data pack lesser the cost per GB .

Reliance Jio Plans start at 149 their cheapest plan provides  300Mb of data for 28 days , its  not much of a great deal since most of other companies 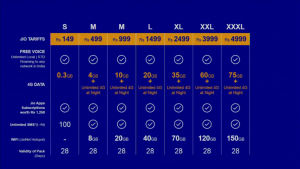 Night Unlimited means the timing is from 2 AM to 5AM . Just 3 hours !

Realicen wifi plans start at Rs. 499 for 8gb for data . The WiFi plans provide double the data at same rates without night unlimited option. Night unlimited option was a good thing if they provided it to Jionet Hotspot also. Biggest plan we can avail is Rs.4999 plan which gives 150g for 28 Days.

Considering their plans an average user can use upto 5 – 10 Gb of data per month on their phone so they can go for  999 plan and a medium user users up to 40 gb . Other plans are only for those have lot of money to spend on data. There are reports of people using 240 gb in 3-4 weeks using Reliance 4g . Now here is one big question are these bigger plans usable for anyone ?