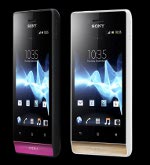 Sony has launched its new handset, Xperia Miro in India at a price of Rs 14,499. It features a 8.8-cm (3.5-inch) TFT capacitive touchscreen and runs Android 4.0 (Ice Cream Sandwich) OS. The phone is powered by a 800 MHz Qualcomm processor.

The new phone has a 5 megapixel camera with auto focus, 4x digital zoom and LED flash, similar to what the other Xperia phones in the range offer. It also has a front-facing VGA camera, giving users the chance to use video-chats without paying for a premium priced phone.

Sony Xperia Miro has an internal memory of 4 GB (up to 2.2GB user-accessible memory). Its memory is expandable up to 32GB, using a microSD card. The phone has 512 MB. It is loaded with a Li-Ion, 1500 mAh battery, which claims to offer up to 5 hours of talk time and 470 hours of standby time.

Other features include WiFi, WiFi Hotspot functionality, DLNA Certified, Bluetooth and native USB tethering. The phone is expected to be available in third week of September, as per the information shared by some websites.