DUESSELDORF, Germany — Apple won the latest battle in a global legal war with Samsung on Friday when a German court banned the Korean firm from selling a tablet computer in Germany, ruling it had copied the iPad. 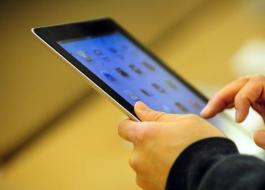 Presiding judge Johanna Brueckner-Hoffmann said there was a “clear impression of similarity” between the Apple and the Samsung products.

As an example, she cited the “minimalist, modern form” of the two firms’ products, with flat screens and rounded edges.

However, the court limited the sales ban to Germany, despite ruling in a previous judgement that the ban should be Europe-wide.

The court ruled that “it could only be competent to order a Europe-wide ban for a firm headquartered outside the European Union if this firm has a German subsidiary,” it said in a statement.

A spokesman for Apple declined to comment on the judgement.

Samsung said: “We are disappointed with this ruling and believe it severely limits consumer choice in Germany.”

The firm added: “Samsung will actively and immediately appeal this ruling to protect our intellectual property rights.”

The Korean firm, which denies Apple’s argument that it had “slavishly” copied the market-leading iPhone and iPad, had to pull its latest Galaxy Tab 7.7 inch from a major electronics fair in Berlin earlier this week in view of the case.

Industry analysts say that in the fast-moving world of tablet computers, which have a very short shelf-life before being replaced by improved products, even a temporary ban on sales can be fatal.

“This decision is a catastrophe for competition, for the whole industry, but it’s not over yet,” Sascha Pallenberg, a technology expert, told AFP.

“The judge basically said that only Apple is allowed to sell thin square tablets with round edges. That’s just insane,” he added.

The two firms are also locked in legal battles in Australia, the United States and Asia. Samsung has responded to Apple’s accusations by filing suits of its own in Seoul, asking for a ban on sales of the US firm’s products in South Korea.

The tussle began in April when Apple filed a suit accusing Samsung of copying its smartphones and tablet computers. Samsung responded with a claim in Seoul alleging five patent infringements by Apple.

The US company upped the ante in July by asking the US International Trade Commission to block imports to the United States of some of Samsung’s smartphones and tablet computers.

In the Netherlands, a court in the Hague banned three Samsung telephone models on August 24 following an Apple suit. Samsung launched a counter-claim, due to be heard by the same court on September 26.

And Pallenberg said it would not really stop consumers from getting their hands on the product if they were determined enough.

“Anyone who really wants to have this tablet can just buy it abroad,” he said.

Jeroen Rigole, a Samsung spokesman in Belgium, told AFP the court decision would not affect the situation there.

The Galaxy Tab 10.1 “is not yet on sale in Belgium, but we will launch in the coming days, probably next week,” he said.

He said there was no comparable case in Belgium.

Samsung’s Galaxy Tab, hailed by some in the industry as an “iPad killer”, has been a huge-selling rival to the touch-screen phenomenon.

Despite their prickly competition, the two actually have a close business relationship.