Google has begun rolling out an update to Android KitKat, bringing the OS on its Nexus family of device up to version 4.4.2.

Nexus phone and tablet devices, except the Galaxy Nexus, have been receiving the over the OTA to Android 4.4.2, which will fix a few bugs effected with the Android 4.4.1 update last week that fixed the Nexus 5’s camera. Not all Nexus devices got 4.4.1, however this latest update brings all models up to date.

According to Android Police, 4.4.2 also includes fixes for the Nexus 5’s camera, so anyone with that device that didn’t receive Android 4.4.1 should get the amendments in the latest update.

A list of fixes from US carrier Sprint details the changes in 4.4.2:

For now, the only other devices to have received KitKat are the Google Play Edition versions of the Galaxy S4 and HTC One, as well as Motorola’s Moto X 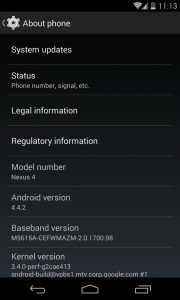 Thanks Lijo Philip for the Image