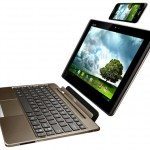 The latest buzz in the tablet market is for the ASUS PadFone, which will hit the Indian market along with the Transformer Pad TF300T in a week’s time. The price has not been disclosed yet but will be announced very soon. The device is a combination of two different devices, a tablet and a smartphone, which can be docked together as a laptop using a keyboard.