BlackBerry is going to be launching another smartphone running BlackBerry 7 in 2013, but don’t let that make you think it has given up on BlackBerry 10. On several occasions, it has made it quite clear we’re to expect something special running BB10 before the end of the year.

Rumors have started to spread about a device codename Aristo, which could be named the BlackBerry A10 if it’s officially launched, and it is indeed something a little bit special. If the rumors are correct, it could be BlackBerry’s first truly large screen smartphone.

Prior to BlackBerry 10’s official launch, BlackBerry’s marketing chief said we should expect six BlackBerry 10 phones on sale this year – so far we’ve had the Z10, Q10, and Q5 – and subsequently, CEO Thorsten Heins has said he was excited about one particular product, said to take the user experience to, “another level,” which may make it into stores before the end of the year. An analyst has also speculated a 5-inch smartphone could be on BlackBerry’s roster for 2013. Could the BlackBerry A10 be the phone Heins is describing? Possibly, so let’s take a look at everything we think we know about the BlackBerry smartphone/tablet hybrid.

A rumor featuring a device known as the Aristo first appeared way back in October 2012, that’s several months before BlackBerry 10 was even launched. It provided us with a glimpse of a supposedly official internal document, then with Research in Motion branding, and described a phone not unlike the BlackBerry Z10, but with a larger 4.65-inch OLED screen and a quad-core, 1.5GHz Snapdragon processor.
The spec list continued to include 2GB of RAM, 4G LTE connectivity, an 8-megapixel camera, 16GB of storage memory, NFC, a 2800mAh battery, and a 1280 x 720 pixel resolution. Over at CrackBerry.com, the device was said to be an A-Series phone, but this was before we knew BlackBerry’s new naming formula.

Talk of the Aristo fizzled out until April 2013, when a new rumor popped up describing an updated version of the smartphone. This time, the Aristo was said to be packing a 1.9GHz quad-core processor, a heady 4GB of RAM, and the screen resolution would be bumped up to 1080p. Finally, the battery would get a small boost to 3000mAh.
If this sounds too good to be true, it probably is, as BlackBerry’s Marty Mallick, VP of Global Alliances, said at a conference held in May the company would be keeping it simple for 2013 and concentrating on two screen resolutions, 720 x 720, and 1280 x 720. BlackBerry had also said maintaining two resolutions would be better for developers, and makes a statement to that effect on its own website. If you’re dreaming of a 1080p BlackBerry 10 phone, then you may have some time to wait before one arrives.

Fast forward to early July and BGR.com printed some new details on the Aristo, calling it the BlackBerry A10, and claiming it will be the, “Most powerful, capable BlackBerry yet.” Oddly, it’s also mentioned the A10 will be aimed at gamers, a genre few associate with BlackBerry devices. The specs have changed again, as this time the screen measures 5-inches, while the processor is a dual-core chip with 2GB of RAM. Apparently, BlackBerry won’t be using a quad-core chip due to problems getting an acceptable level of standby out of the battery. 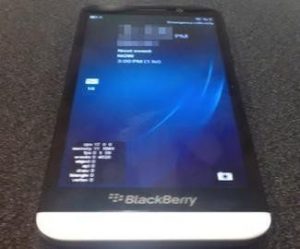 A blurry picture of the BlackBerry A10 has been leaked, giving us a vague clue about the phone’s design, and the answer is, it’s not unlike the BlackBerry Z10. The source of the photo also says the screen measures 5-inches, and has a 1280 x 720 pixel resolution.

A leaked slide, marked as confidential by BlackBerry, shows another full set of specs, plus that the A10 will run version 10.2 of the BlackBerry 10 operating system. BlackBerry 10.1 has only just started to appear on Z10 phones, although it was installed from the factory on the Q10, and any new features inside 10.2 are a mystery. The slide is dated May 23, and says the A10 will come with a 5-inch, 1280 x 720 pixel OLED screen, a 1.7GHz dual-core Snapdragon processor, 2GB of RAM, an 8-megapixel rear cameram NFC, 4G LTE and 16GB of storage.

If all that has whet your appetite for a large screen BlackBerry smartphone, you’ll want to know when it’s coming out. As it hasn’t been officially announced yet, all we can offer is speculation, but a report from CNet in June says a BlackBerry source informed them the A10 would launch in November, and that Sprint will be stocking it. Sprint passed on the BlackBerry Z10, but was expected to pick up the next all-touchscreen BlackBerry 10 device, so this fits in with what we already know.

The question is, if the A10 really will have a 5-inch screen with a 1280 x 720 pixel resolution and a dual-core processor, is it going to be embraced by smartphone fans used to their 5-inch phones coming with quad-core power and a 1080p screen? If everything goes as expected, we’ll find out before the end of the year.