When BlackBerry first launched the Z10 – a full-touch smartphone – buyers asked for one with a physical QWERTY keypad. Now that the smartphone vendor has started rolling out the Q10, a premium smartphone with a QWERTY keypad, they want a cheaper variant. That hole will be filled by the R10, which has been leaked in the past, but now we have a better photo of the device courtesy Instagram user Tamarabatal.

If the Q10 carries the Bold series design to BB10, the R10 is unmistakably the Curve equivalent with its chiclet keypad and seemingly plasticky finish. The leaked phone in red suggests that BlackBerry would launch it in multiple colors, just like it has done with the Curve series smartphones in the past.

The keypad lets go of the top-row buttons, which suggests a complete touchscreen based UI, just like the Q10. Also, the square display gives the phone a tallboy look, which reminds us of Palm’s Pixi webOS smartphone. We expect BlackBerry to launch the R10 in the third quarter and considering its annual BlackBerry Live event is barely a fortnight away, we shouldn’t be surprised if it is unveiled there. 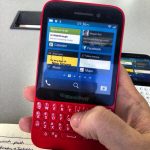