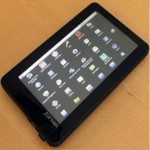 The company behind Aakash and UbiSlate, DataWind that previously surprised the consumer electronics market with its low-cost tablets has another revelation to make. However, this time the company is taking a step back. DataWind is reportedly planning to discontinue its low cost tablet, UbiSlate7+.

The company has cited the fluctuating rupee-dollar value as the chief reason. According to a company official, the firm is looking forward to end the UbiSlate 7+ tablet as it is bringing losses to the firm. The tablet priced at Rs 2,999 had set the Indian market on fire with its pricing.

Earlier this year in April, DataWind announced the launch of its low cost Android-tablet- UbiSlate7+ which infused severe hype among tablet enthusiasts. As an outcome, DataWind’s website was flooded with pre-orders. However, this remains to be a clueless mystery as to why a majority of the pre-orders are still not met and the majority of the customers are left with nothing but anguish and frustration with them.

But all this does seem to dither the company’s focus in the Indian tablet market as it has launched four new tablets last week. The new tablets are priced below Rs 5,000.

On the other hand, the large customer group that pre-ordered the UbiSlate 7+ and are anticipating their dream tablet for many months might have to think of some another choice now.