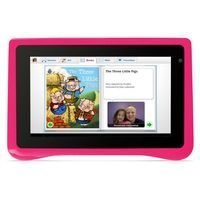 Even though the market is currently populated with slabs such as Archos’ ChildPad and LeapFrog’s LeaPad 2, the race to become the go-to-child-friendly tablet could still be considered as wide open.

Ematic had previously introduced its FunTab for kids. Ematic is not exactly a newcomer to this territory, and this time out the company is looking to build on its previous release with the announcement of a slightly more powerful `Pro’ model.

Additionally, Ematic has placed emphasis on its built-in Zoodles feature that `creates a safe and educational online learning experience for children,’ plus the inclusion of pre-loaded apps like Skitch, School Assistant, Cut The Rope and Angry Birds game. The FunTab Pro will be available at Walmart and with other retailers for $150 and will come with colourful chageplate.

The Kids tablet segment in the US seems to be a viable market for the tablet makers. Over the last couple of months we have seen numerous brands unveiling their kids range.

The Indian market is yet to observe such maturity in the tablet segment as major tablet makers are occupied in targeting the mass consumer.