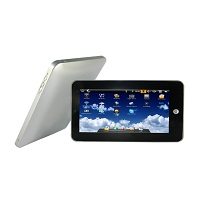 Month after month we hear about the launch of a slew of tablet PCs is the Indian market. Fujezone had earlier launched a few tablet PCs in the past and now, the company has added a new player to the portfolio. Called PC- CT 01, the tablet sports a 17.74-cm (7-inch) capacitive touch screen and runs the Android Ice Cream Sandwich 4.0 OS. Just like the offerings being made by other brands, the PC-CT 01 is powered by a 1.2 GHz A8 processor.

The tablet comprises 4 GB of internal memory that is expandable to 32 GB and has a RAM size of 512 MB. According to the company, the tablet has support for all major audio, video formats, social networking apps, messengers, etc.

The tablet is priced at Rs 6,199 and the company is offering a Fujezone 3G data card free of cost along with it. However, other details about the tablet’s camera (if any), battery, flash support, etc is not yet clearly known.

Fujezone had previously launched X88, CT-01 in the market.