Today ASUS and Google announced the launch of new Nexus 7 tablet. The new Nexus 7 comes with the 17.7-cm (7-inch) IPS display, which promises to deliver unmatched visual acuity and sharpness. The device gives a resolution of 1920 x 1200 pixels with 323 pixels per inch (PPI) density.

“We are extremely elated to bring the all new Nexus 7 which is sleeker yet comprises the same sized screen and significantly increasing performance. The quality of the pixels has been improved with a 30% wider color gamut than the previous generation model; ensuring colors are both accurate and vibrant to further enhance the user experience. Our constant quest for the incredible has led us to further innovate and deliver a device which is the ultimate blend of power and portability,” said Peter Chang, Regional Head – South Asia & Country Manager – System Business Group – ASUS India.

The new Nexus 7 has thinner bezels and slimmer profile for more comfortable even for one-handed use. It has a 17.7-cm (7-inch) 16:10 Full HD display with a 30 per cent wider color gamut and 10-finger multi-touch. It has a rear-facing 5 mega pixel camera with large f/2.4 aperture, quad-core Qualcomm Snapdragon S4 Pro (APQ8064-1AA, with Krait 300 cores) processor running at 1.5GHz along with 2GB of RAM. the device also has up to 32GB of fast internal eMMC storage with FSTRIM function. It runs the Android 4.3. 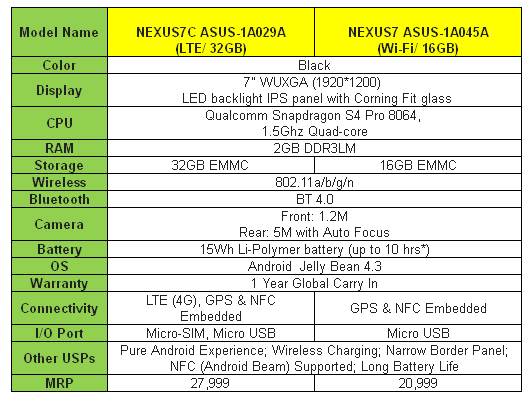