According to Google’s official stats, Android Lollipop is still maintaining its position in lead with version 5.0 taking 9.8% of the Android distribution numbers, while 5.1 stands at 23.1% which makes the grand total for Lollipop to 32.9%. Android 6.0 Marshmallow now accounts for 30.7% of Google’s distribution chart while Android Nougat broke the 1% mark for the first time, with 7.0 holding 0.9%, and 7.1 – 0.3% for a total of 1.2%. It seems that the adoption of the first Nougat version rose the most, by 0.4% compared to 0.1% for Nougat 7.1. The two combined Nougat versions now hold a share of 1.2%, up 0.5% compared to last month. 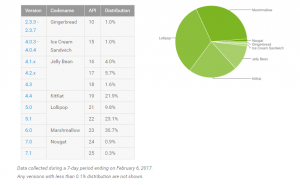 Premium smartphones that are announced recently run Android 7.0 Nougat, while many smartphone makers have just released updates for the first Nougat version that includes the big ones in the market like Samsung, Motorola, HTC and Sony in the list. This simply implies that Nougat 7.0 distribution numbers will continue to grow in the coming months.

Gingerbread is the oldest active Android version present in the list as Android Froyo finally died last month. Kitkat is now installed on 21.9% of all Android-running smartphones, down 0.7%, while Jelly Bean runs on 11.3% of phones, dropping 0.3%. Ice Cream Sandwich holds a 1.0% share, so does Gingerbread which won’t be included in the Android Distribution chart when it soon drops below 1%.

While analyzing Google’s February Android distribution numbers we can see that new versions like Nougat and Marshmallow seeing gains, and older versions taking slight drops, a trend that can continue for the next couple of months.