Android continues to be the hot favourite among tablet makers. Despite much buzz about Windows 8, when Lenovo thought of expanding its tablet portfolio, it resorted to Android. Lenovo introduced three new members of the IdeaTab family at this year’s IFA in Berlin. The company announced three tablets called IdeaTab A2107, A 2109 and S2110. The devices come after IdeaTab S2109, which failed to impress the market at a a price of $349.99. 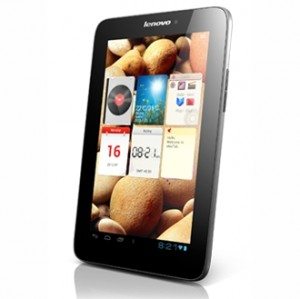 Let’s begin with the smallest in the bunch, IdeaTab A2107. The tablet features a 17.8-cm (7-inch) screen and poses a tough fight against Google’s Nexus 7 tablet. The device is powered by an MTK Cortex A9 processor. Lenovo has not mentioned about the exact clock speed of the tablet. The company has added a built-in roll cage for better durability. Other specs of the device include a microSD card slot, microSD expandable memory, built-in FM tuner and 16 GB of built-in memory. The company kept tight-lipped about a couple of important details including screen and price.

The company, however, offered a more detailed insight on its other launch IdeaPad A2109. The A2109 features a 9-inch screen display with a 1280-by-800-pixel resolution. It is powered by 1.2-GHz quad-core Tegra 3 processor. The tablet features an aluminum body and comes packed with 16GB of internal storage, micro HDMI out, and front- and rear-facing cameras. The tablet is priced at $299, which makes it a fairly good competitor for large-screen tablets.

Last but not the least is IdeaTab S2110. The tablet competes directly with ASUS Transformer line of devices. It will come packed with a dual-core, 1.5-GHz Qualcomm 8060A processor and up to 32GB of internal storage. It features a 10.1-inch IPS display with 1280-by-800-pixel resolution and 420nit brightness. Like in the Transformer devices, the IdeaPad S2110 features an optional keyboard dock which adds a keyboard, touchpad, full-sized USB ports, an SD card reader, and double the battery life. It is priced at $399 for the tablet alone while if you want the detachable dock, you will have to pay $499.

All the three tablets will run Google’s Android 4.0 operating system. Lenovo has said that A2109 and S2110 will be available this fall, but the company has not confirmed the availability of S2107.