Google often brings themed additions to its wildly famous Google Maps route application to celebrate Mario Day pop culture. We’ve seen it previously with nods to ‘Star Wars: The Force Awakens and previous year with a Ms. Pac-Man shout-out. This time around, Google is demonstrating some affection for Nintendo’s most notable character: Mario.

March 10 is an informal day began by gamers to celebrate Nintendo’s most beloved character, “MAR10”. To celebrate this fine event, Google will update the Google Maps application for iOS and Android to highlight Super Mario driving a Kart. Mario will take control as your directional guide in the Google Maps application. Google is celebrating the day in its own special way. If you use Google Maps today, you will be able to see the famous character driving a Kart. As of now, the update is rolling out though we have not received it right now.

March 10 is dubbed Mario Day. This is because of the abbreviated date of Mar10 looks like his name. Mario is Nintendo’s most cherished character and is set to be transformed into a movie. The organization has confirmed that it is working on an animated Super Mario film, which will be made in association with well-known animation studio Illumination, prestigious for titles including Despicable Me and Minions. 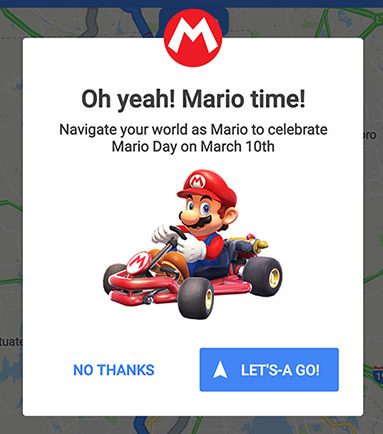 While using Google Maps, First you will have to be updated to the latest version of Google Maps. Then punching in your destination or address, a yellow tappable question mark block (which should be familiar to those that have played countless Mario games) will pop up. When you hit the question mark, A small message shows up from the world’s popular cartoon plumber. The message is “Oh yeah! Mario time!” With a “Let’s-A-Go” Navigate button. To have fun Mario Day, Mario will be available for the next seven days.

During your route, Mario will ride along with you on a red go-kart until the point when you reach your final destination. Google says that this Mario incorporation will be accessible for one week, so you will have a lot of time to get motoring’ with gaming’s most loved plumber (sorry, Luigi).

There is also a special reward if you don’t mind some repetitive tapping. If you tap the question mark 100 times before previously releasing Mario, you’ll be greeted with an Easter egg as the famous 1-UP sounds from Nintendo’s library of games.

Nintendo is also celebrated Mario Day by offering 50 percent discount on Super Mario Run, which means unlocking the game through in-application purchase will cost you $4.99 rather than $9.99 through March 25. The new lower pricing for the in-app purchase will be accessible beginning on March 10.

This definitely gets us advertised that the upcoming Mario Kart Tour game set to release for iOS and Android. Currently, the company is working on this game application.  Tragically, we have still got another year to wait until March 2019.