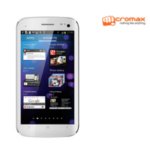 Previously, Micromax entered the 12.5-cm (5-inch) phablet segment with its Superfone Canvas A100. The device featured a 12.5-cm (5-inch) screen with a resolution of 480 X 480 pixels, running Android 4.0 Ice Cream Sandwich on a 1 GHz single core processor. This sub 10k phablet wooed the low-end Indian market, but several users complained about the single core processor, which somehow handicapped the device. Now, Micromax is looking forward to launch a dual-core version of the device named A110 Canvas 2. The Canvas 2 is already available for pre-orders at Snapdeal.com.

The revamped version of the Canvas comes with a 12.5 cm (5-inch) screen, 1 GHz dual processor and runs on Android 4.0.4 (Ice Cream Sandwich). Other salient features include an 8 MP camera with flash and auto focus, 0.3 front camera, expandable memory up to 32 GB, 2000 mAh powerful battery, V3.0 Bluetooth connectivity, 5 hours of talktime and 180 hours of standby time. Customers can now book A110 via Snapdeal for Rs 500. Moreover, this deal also has a contest whereby lucky customers can get free passes to the Enrique concert and get an opportunity to meet the star in person.

opening mobile in pc, what is frbt in bsnl, mobile site for pc, can you check another mobiles balance, mobile site on computer, charges on more than 100 SMS in a day TRAI, jio mifi
Facebook Twitter WhatsApp Telegram
Back to top button
Close
How to whitelist website on AdBlocker?