Hit the speed of heat in the fastest, most visually stunning edition of the Asphalt series. It’s you against the world in 60 of the most amazing cars by prestigious makers like Audi, Lamborghini and Aston Martin. A total of 150 races on tracks across the globe, from Paris to Rio, await you in 6 different game modes with local and online multiplayer for up to 6 racers. Tap into the Asphalt Tracker to find friends to challenge then share your achievements and compare stats, or you can find an opponent using the online matchmaking system. Whatever device you use, Asphalt 7 will push its limits!

Join Breck Powers, our space hero, and help him explore the mysterious and newly discovered planet Mochwoi!
– Create and expand your own space-age colony
– Discover mysterious landmarks all over the planet
– Explore space and seek out planets in your search for artifacts
– Fight against space pirate invasions in a fun mini-game
– Face unexpected events, like falling meteorites!
– Interact with friends, visit their colonies and boost each other’s reputations!
– Complete many missions and manage resources to make your people happy and your colony prosperous. 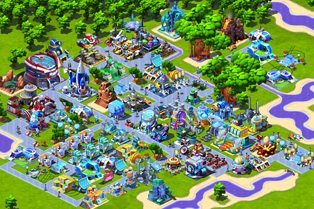 “Discover a magical world of cute monsters and exciting battles! This is the thrilling world of Monster Life!
A century ago, the islands of Numa were attacked by the mysterious Chaos. But a young monster keeper and his monsters fought back and brought peace to the islands!
As a novice monster keeper, you must now learn how to raise and train your own team of monsters as you build your own custom-made kingdom for them to live in. Then set off to explore every corner of the surrounding islands and stop the Chaos again!”

Discover the new benchmark for physics puzzle games! Shark Dash FREE is a highly addictive game that takes the physics puzzler to fun new heights with a unique cartoonish style starring funny little bath toys!
Sharkee and his merry band of toy sharks were living happily in the bathtub. That is, until a bunch of mischievous ducks came along to ruin their peaceful little world. When the ducks kidnap Sally, Sharkee’s girlfriend, Sharkee and his buds decide they’ve had enough! Join a wild journey to tricky bathtubs around the world, save Sally and get rid of the dimwitted ducks!

Get ready for intense web-slinging action with The Amazing Spider-Man in the official game app of one of 2012’s most anticipated super hero movies. Play through the movie storyline as Spider-Man faces off against the Lizard and rampaging gangs. Web-sling and crawl your way through an open, fully 3D New York while using your amazing skills to save the city.

The epic conclusion to filmmaker Christopher Nolan’s Batman trilogy arrives on Android in the exclusive video game inspired by the movie.
After being gone for eight years, Bruce Wayne gets back into action as Batman. Waiting for him are the mysterious Selina Kyle and Bane, a lethal adversary on a crusade to tear apart Batman’s legacy piece by piece.
Dozens of missions plus random events will make you feel all the thrills of being a superhero. Deal with hostage situations, bomb squads, jailbreaks and car chases to prove that you’re the true protector of Gotham.

Step into the criminal underworld, where only the most powerful and ruthless gangs thrive in this ultimate social card game! As the gang boss, you will lead your members to complete quests, defeat rival gangs and face-off against friends to rule the streets! You can play solo or team up with your friends in Story mode. Gang Domination allows you to collect more than 200 artistically designed cards that were specifically created for the game! Discover rare and powerful cards, combine them together to make them stronger, gather powerful tattoos and you will rule the most powerful gang!