Earlier this week the first benchmark surfaced of a Windows Phone 8 device from Nokia with a quad-core processor from Qualcomm, possibly the Snapdragon 400, considering the fact that the processor is accompied with the Adreno 305 GPU, which certainly isn’t very high-end compared to the Android flagship devices. However, we can confirm that the Finnish developer has already added support for the Snapdragon 800 and the Adreno 330, probably the fastest chip that is available at the moment, although we are still waiting on the first devices making use of this beast.

On a number of developer pages we found various references to the Snapdragon 800-soc from Qualcomm and we also found out that Nokia is only listing hardware that they are actually using, so you can be absolutely sure that they will be coming with something really interesting. It seems that Nokia and the Windows Phone are almost there to compete directly with the powerful Android devices in terms of hardware specifications. We haven’t found any references that they are working on a 1080p display, but support should be coming from Microsoft with the GDR3 update, which should be released before the end of the year. 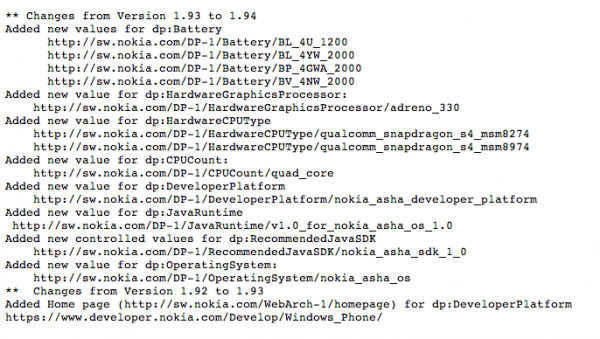