Sony announced its first quad-core smartphone at its CES press conference today: the Xperia Z. The company will be hoping this new Android flagship can deliver the scalps of high-end rival devices such as Samsung’s Galaxy S3 and Apple’s iPhone 5. The 4G handset has a symmetrical, rectangular slab design with clean lines and flat glass panes to front and back, coupled with blunted edges and minimally rounded corners. 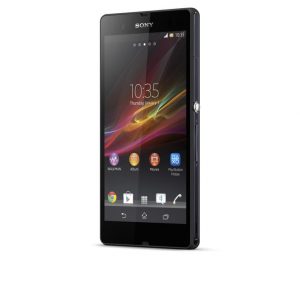 Sony smartphones haven’t exactly fared well against the competition in recent years, something its own mobile chief ‘fessed up to in the fall. But the Japanese electronics maker appears determined to get its mobile house in order, starting with the 2011 buy-out of its Swedish other half Ericsson – followed by its first solely Sony-branded handset at last year’s CES (the Xperia S).

This year Sony has upped its game — as well it must — with its first quad-core flagship, and its first 5-inch screen phone. The Xperia Z is the “Yuga” device which leaked earlier this month. Sony is also launching a variant — called the Xperia ZL (aka “Odin”) — which has a slightly different industrial design/shape with a curved, plastic back to “fit easier in the hand,” which isn’t waterproof but is otherwise the same hardware. Don’t get distracted, though: Sony is going to be shouting loudest about the Xperia Z, calling it its “primary” and “lead” device for 2013 in most markets, including Western Europe and Japan.

Here are the key specs for the Xperia Z:

Sony is still trash-talking its output last year, and clearly wants to start afresh — with a clean (glass) slate. ”The Ericsson acquisition had gone through so quickly, in reality we weren’t really fully prepared to be part of the wider Sony family/fully integrated in the Sony family [last year],” Calum MacDougall, Director of Xperia Marketing Programme at Sony, told TechCrunch. “But we think this device is a real step forward in a real Sony smartphone. It combines the best of what Sony has to offer.”

With a 5-inch display, the enormo-phone trend that Samsung has been driving with devices like its Galaxy Note series and its flagship Galaxy S3 has not passed Sony by. But despite packing a massive screen, the handset feels relatively lightweight (146g) and manageable, being just 7.9 mm thick. It’s a fraction thicker than the iPhone 5 but thinner than the Galaxy S3. It also has a premium feel, thanks to those tempered glass panels on the front and back (no, you can’t remove the battery).

Sony has focused its full attention on the full HD (1920 x 1080) screen which includes its Reality Display TV tech and Mobile Bravia Engine 2 — the former giving the screen a more realistic colour-cast than some of the hyper-saturated AMOLED smartphone screens out there, and the latter designed to improve viewing of non-HD footage (by sharpening and increasing the saturation of content — to make it more vivid and improve clarity). Pixel density is exceptionally sharp, at 443 ppi, so if you want a device for watching movies and TV shows on the go, the Xperia Z shouldn’t disappoint.
Xperia Z water tank

Elsewhere, Sony has added contactless transfer/payment technology NFC, which continues to struggle to gain serious traction with consumers but is at least a nice to have for pairing with NFC peripherals like speakers. (Sony is also launching NFC- and Miracast-enabled TVs at CES which locate the NFC chip in the TV remote so you can share content from a smartphone to the TV by tapping the handset on the remote.)

Being now an entirely Japanese company, Sony has also made the Xperia Z waterproof (and dustproof) — a very common feature for Japanese smartphones.

On the software side, the Xperia Z runs Android 4.1 Jellybean, which is a slight disappointment since Android 4.2 is out in the wild. But Sony assures me it intends for the Xperia Z to get upgrades to 4.2 and the next iteration of Android (codenamed Key Lime Pie). On top of Android, the Xperia Z has a lightweight Sony UI, but thankfully the company appears to be learning that less is more when it comes to skinning Android. The UI has shed some of the uglier widget animations that were a blight on past Xperia devices, and felt fast and slick during my brief hands on. Sony said the UI is not something it intends to emphasise — it’s not even giving it a brand name.

Instead, Sony is fully focused on talking up its multimedia services, which sit inside the primary media applications on the Xperia Z: Walkman for music downloads, and to access Sony’s Music Unlimited streaming service (which offers 80 million tracks, but only if you pay a monthly subscription); Movies for video content, including access to Sony’s Video Unlimited store for renting or buying films; and PlayStation Mobile for accessing Sony’s games app store. There’s also an Album application where photos live, which also pulls in images from your Facebook and Picasa accounts and includes a geotagging feature to map where pictures were taken.

The Xperia Z also includes a battery maximising mode — called Battery Stamina Mode — that can be switched on to extend standby time by 4x (or more). It works by turning off all background apps when the phone’s screen is off, with the exception of standard telephony and SMS. Users can also whitelist certain apps to ensure they still run in the background if required.

Sony is offering the Xperia Z in three colour options: black, white, and purple (see below). Exact launch date, markets and pricing are to be confirmed, but Sony said it is planning a “global launch” in “Q1 2013,” adding that the initial focus will be Western Europe.