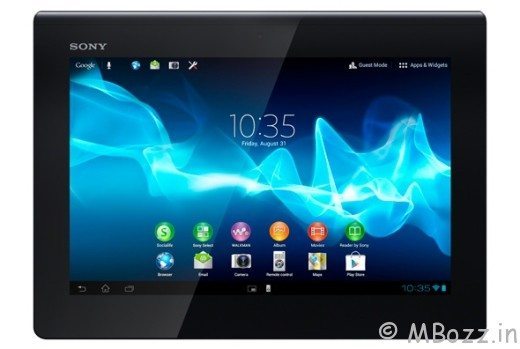 As per the report by AndroidOs.in, Xperia tablet S features a 23.8-cm (9.4-inch) HD display with low-friction coating, houses 8MP rear camera and 1MP front camera, it runs on NVIDIA Tegra 3 quad core processor. The tablet is available in three variables- 16GB, 32GB and 64GB. Also, it has connectivity options like Wi-Fi and 3G in 3G models.

Many applications by Sony are incorporated in this entertainment tablet and it is also being said that the device will not be getting the Jelly Bean update in near future and the customers will have to wait.

The firm will be coming out with various accessories for this tablet, such as â€“ docking stand, keyboard cover, carrying cover, charging cradle, dock speakers, etc. All these accessories will be available in the market along with the tablet.

Sony Xperia tablet S will be available in the European market from September onwards and then it will reach other markets across the world. There is no word from the company on the price of the tablet.