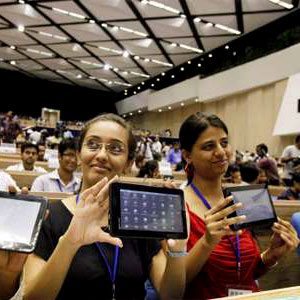 Aakash continues to the be the ‘controversy king’. After Gujarat’s chief minister Narendra Modi commented on the slow pace of development in the ‘Aakash matter’, it is now the turn of Union Minister Kapil Sibal to retaliate.

If some latest online reports are to be believed, Modi can be one of the first people to get a hands-on on the much-awaited Aakash-2. Sibal has said that he will be presenting the device to Modi on a public platform. The likely date of this special presentation is 22 September.

Just to give you a backgrounder of the incidence, soon after Congress announced that it will distribute laptops if voted to power, Modi got critical and said, “Kash (If only) this Aakash tablet could land on earth, then the lie they are spreading now would hold some weight.”

Modi didn’t stop here. He went ahead to blame the government for ‘dragging its feet’ on the Aakash tablet distribution. He said that the government could not live up to the promise of delivering the much-hyped device. Sibal reacted on Modi’s comments by saying, “I am surprised at Narendrabhai’s statement. This is such a venture that all over the world, it is being talked about but not so in Gujarat because we think about children 24×7. But in Modi’s Gujarat what happened to the future of the children. He is maintaining silence since 2002…Modi may be rich in politics but is poor at heart. In the next five to seven years, each child will have the Aakash tablet.” Sibal’s gifting Aakash 2 to Modi is a part of this reaction.