Guess what?  “we have got the plans for the MiFi device” and unfortunately it’s not 75gb for 200 Rs”.

Recently reliance was getting too much attention of customers from other service providers as well as from their own customers. It’s all because of the launching of Reliance Jio and the offers they promised. But the sad news is that its all turned to be all just a mask they put on, to make the competitors behind.

The MiFi plans are as follows… 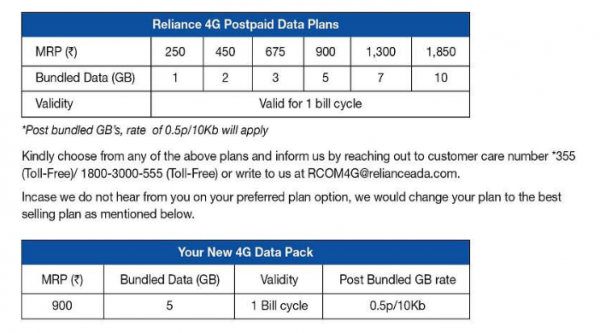 Following this, Complaint Board (National Consumer Complaint Forum) is now witnessing a massive outburst from the users regarding the problems they are facing right now and about the negligence from the part of customer care.  It mentions that they made users to forcefully change from CDMA and become a postpaid Reliance 4G LTE user. In the inception time of 4g LTE Reliance customer Care in-charge assured that they will get 10 GB 4g net free for 1 month and the new data plan will remain the same as CDMA.

Another complaint was like before upgrading to 4g, those users who used 999 unlimited plan which had an upper limit of 40 GB before the limit kicks in were forced to buy the Wipod for offer price of 899/- . Then the officials changed the plan to 5GB with no unlimited option without any prior notification. Some even got a bill around Rs. 13000 as they were using internet by keeping in mind of their old plan. So they are seeking justice from whoever concern. We hope that Reliance authorities will take necessary action as soon as possible! 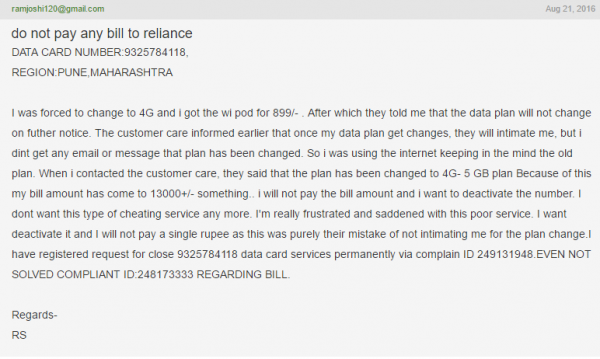 We hope that Reliance authorities will take necessary action as soon as possible. Otherwise with no doubt, they will face some serious damage on their credibility.