WhatsApp users are being tricked into downloading ‘WhatsApp Gold’. Though it claims to be an apparently ‘exclusive’ version of the app, its actually infects mobiles with malware. A number of the app’s users have reported receiving messages urging them to sign up for the service via the WhatsApp Gold website, which is linked in the message. The app’s extra features include the ability to send hundreds of pictures at once, new emojis, video calling, enhanced security features and more customisation options. 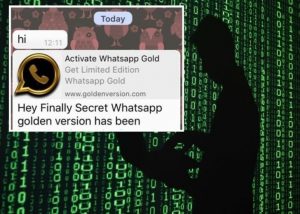 Downloading the program from the website will simply infect your phone with malware, possibly allowing cybercriminals to steal your data or track your movements and activity. There’s been a spate of WhatsApp Gold messages recently, but the scam has existed in different forms for a while, sometimes under the name ‘WhatsApp Plus’. WhatsApp will actually ban users if it detects this unauthorised software on their phones. It advises users to immediately uninstall the unauthorised app, and forces them to wait 24 hours before they can use the real WhatsApp again.

As usual, the best way to avoid the WhatsApp Gold scam is to ignore and delete any messages which mention it.